Shouldn't the after-effects of vaccination be discussed before?

PLEASE NOTE: WHEN PAYING VIA PAYPAL PLEASE MAKE SURE THAT BOTH THE EMAIL & DELIVERY ADDRESS REGISTERED WITH YOUR PAYPAL ACCOUNT IS CORRECT. ORDERS WILL BE SENT TO THIS ADDRESS UNLESS YOU SEND NOTIFICATION OF AN ALTERNATIVE POSTAL ADDRESS.  THANK YOU.

If you prefer you can send a cheque made payable to ‘The Informed Parent Co. Ltd‘ to the address below:

You will be able to download any e-books when you have completed payment. You will need the free Adobe Acrobat Reader program to open them, this can be downloaded from the Adobe Website. 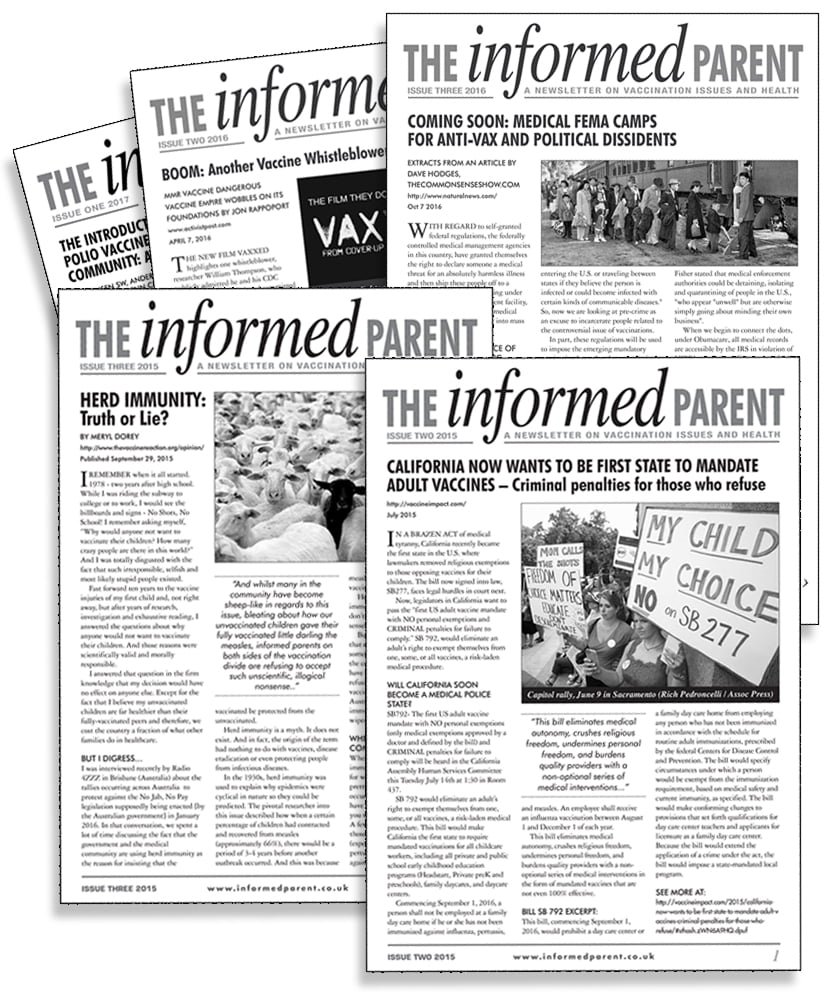 FOR A LIMITED PERIOD: UNTIL 31st JULY 2021
ALL NEW SUBSCRIBERS TO THE INFORMED PARENT NEWSLETTER WILL ALSO RECEIVE
1 FREE BACK ISSUE.

The Informed Parent newsletter, issued three times a year, brings together a wide range of articles on vaccination, including articles from scientific medical journals, holistic viewpoints, and parent’s experiences. 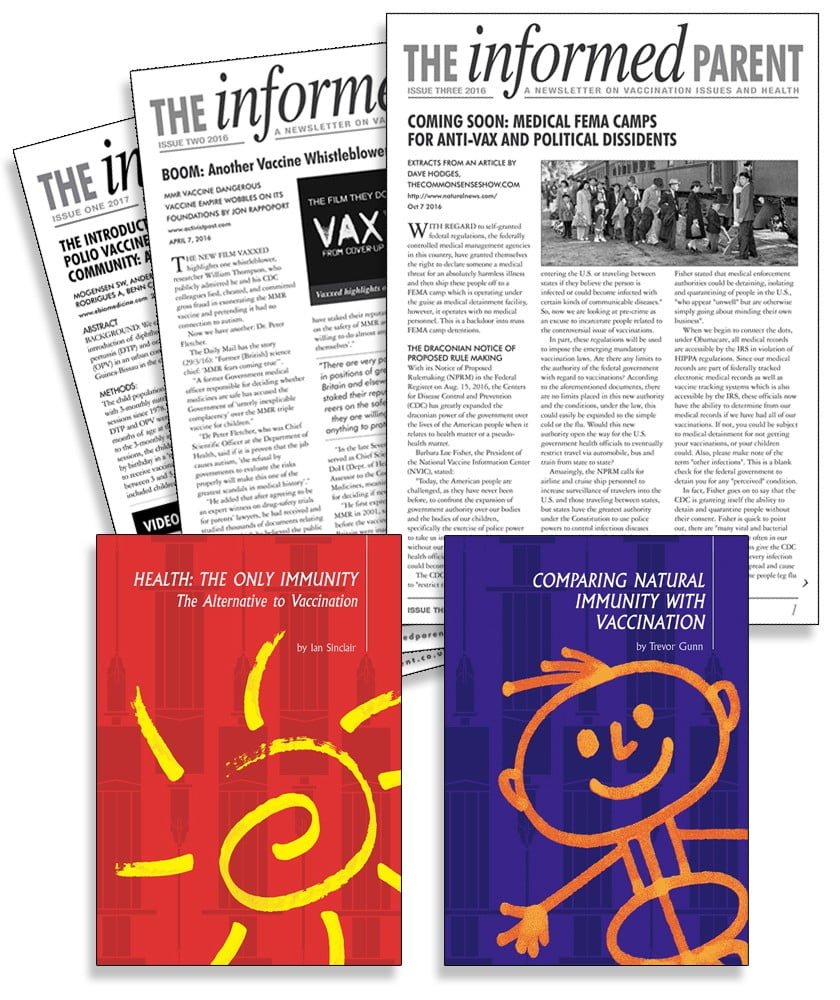 MAKE A SAVING by purchasing a one-year annual subscription of The Informed Parent newsletter and copies of the booklets ‘Health – The Only Immunity’ and ‘Comparing Natural Immunity with Vaccination’ (See Booklet info below). 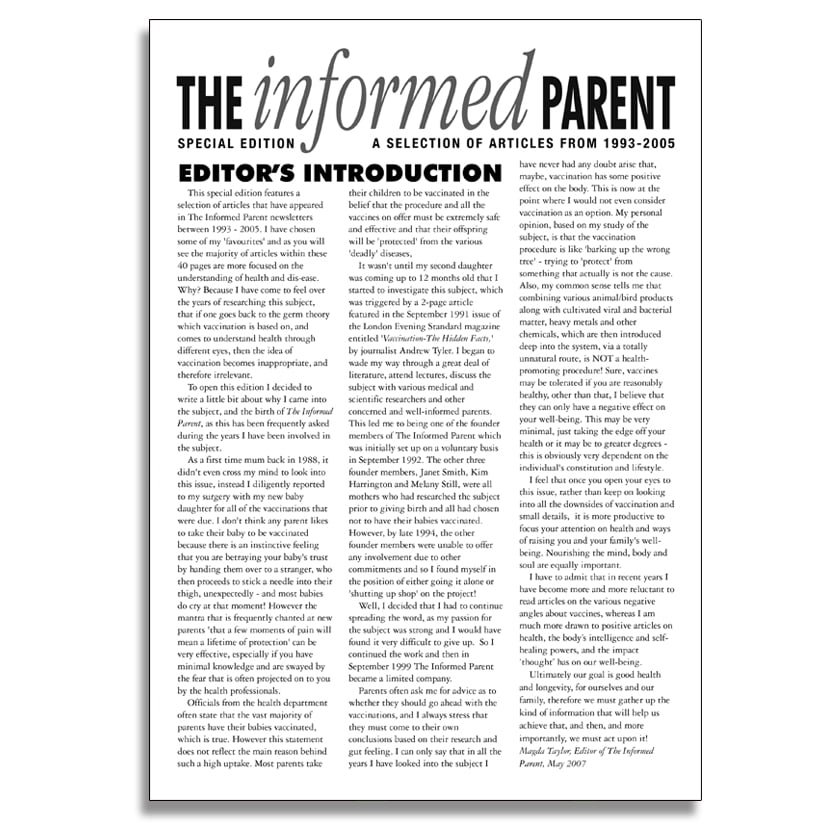 This 40-page special edition is a compilation of some of the best articles featured in The Informed Parent newsletters between 1993-2005.

The assortment of articles include: understanding health and disease, correspondence with the WHO and UK Health Department, medical voices from the past, an in-depth look at fever, a wider look at tetanus, and much more!

An interesting mix of articles, including Swine flu, HPV and the continuing debate on MMR. Also, articles highlighting the growing concerns of some medical professionals as regards to vaccination. Plus alternative views on health and disease that will give you plenty of food for thought.

This set consists of a random mixture of editions dating between 2000 to 2016 – while stocks are available. 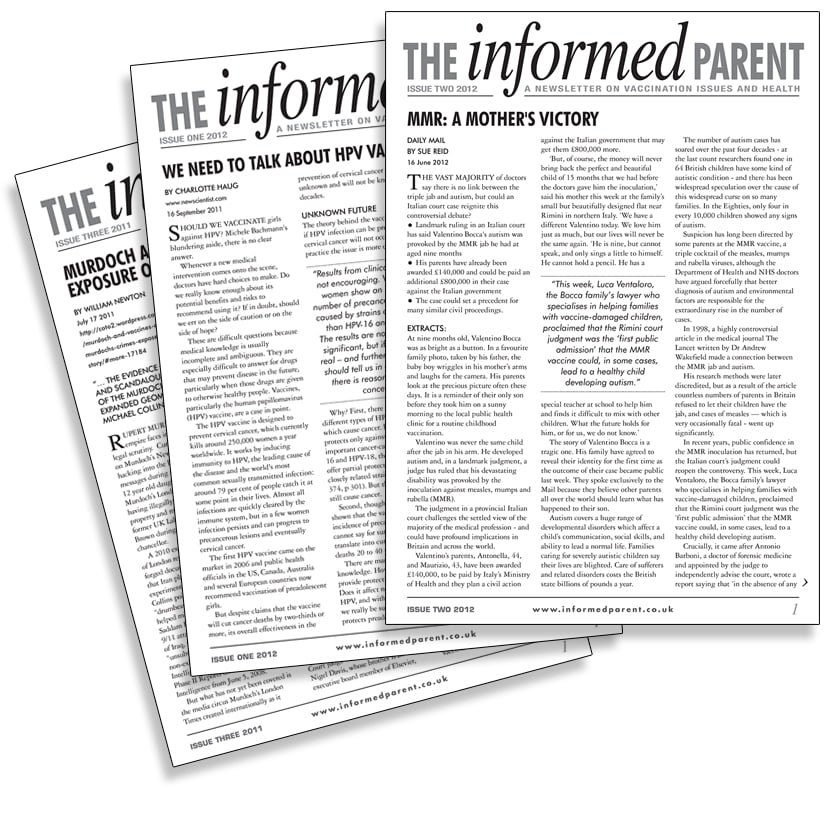 Dr Jayne Donegan, a regular contributor to the Informed Parent newsletter, covered the topic of travel in a 3 part series which was featured in Issue 3 2011/ Issue 1 2012 & Issue 2 2012. An extensive article covering all the typically recommended vaccinations for overseas travel plus the download will also include the rest of the general vaccination articles featured in those editions..

All 3 issues of the newsletter available as a PDF download: £6.00 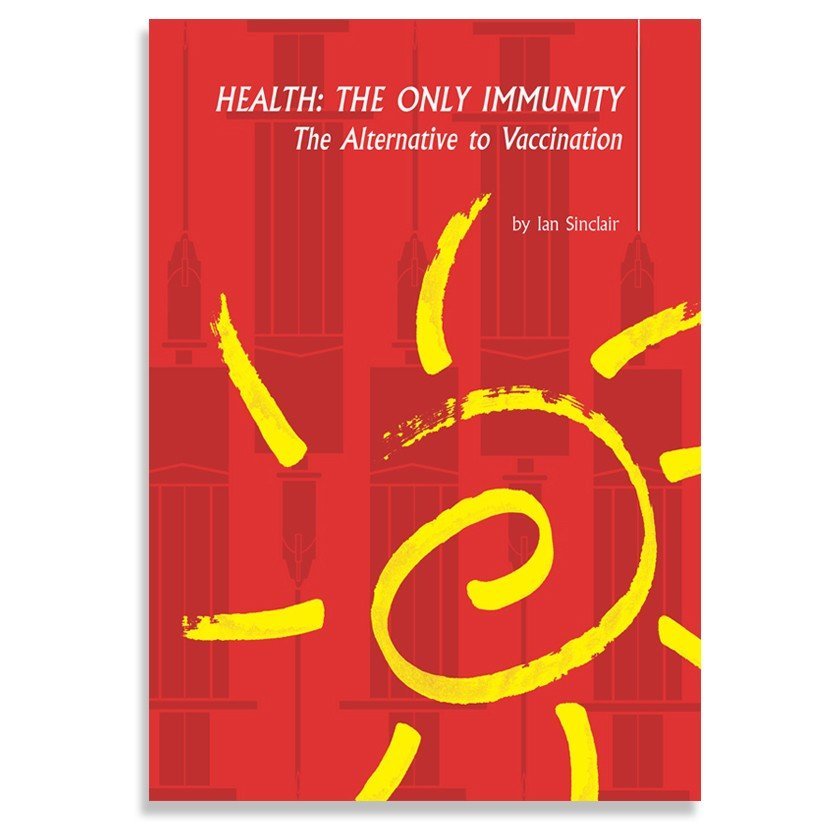 Health – The Only Immunity

This popular booklet is based upon natural health philosophy and presents a clear and simple explanation on how to prevent childhood illness, and keep children in peak physical health – all without vaccines and drugs. It explains the beneficial nature of acute illness in children, and sheds light on the naturopathic view of disease. This latest edition (2009) has been revised, and includes an additional chapter. 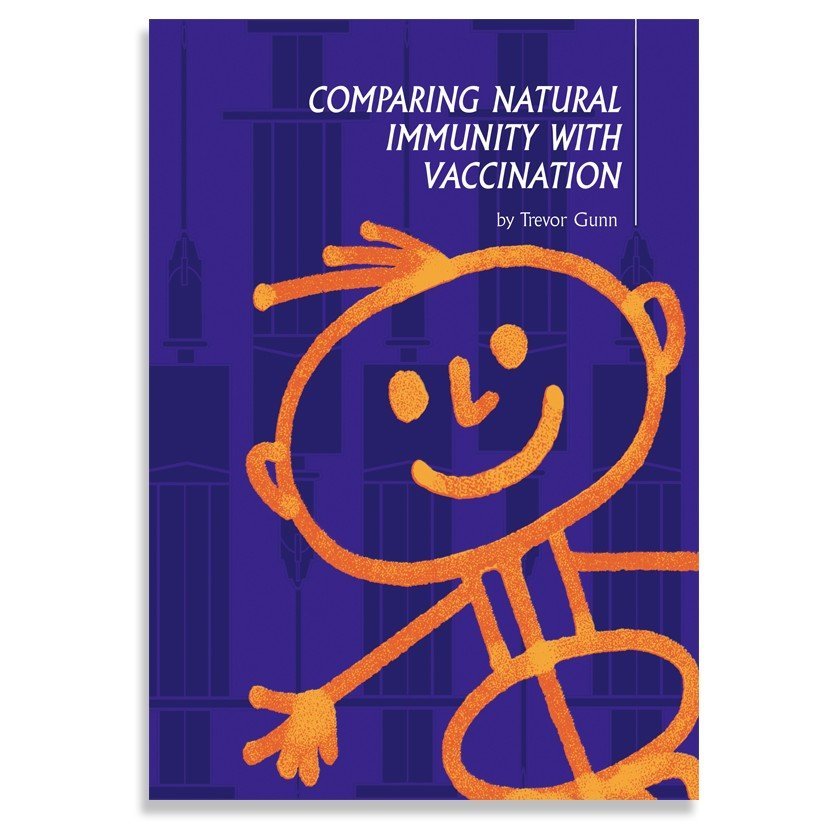 This new booklet is based on the lecture of the same title presented by homeopath Trevor Gunn and challenges many of the assumptions made about vaccination. From the main question that should be asked, that is, ‘Do germs cause disease?’ Trevor presents information to challenge vaccine safety and effectiveness, and the decline in disease. Illness and susceptibility, consequences of acute disease, the immune system and a brief focus on polio, tetanus and travel are also included.

Trevor’s previous booklet ‘Mass Immunisation – A Point in Question’ is now out of print. 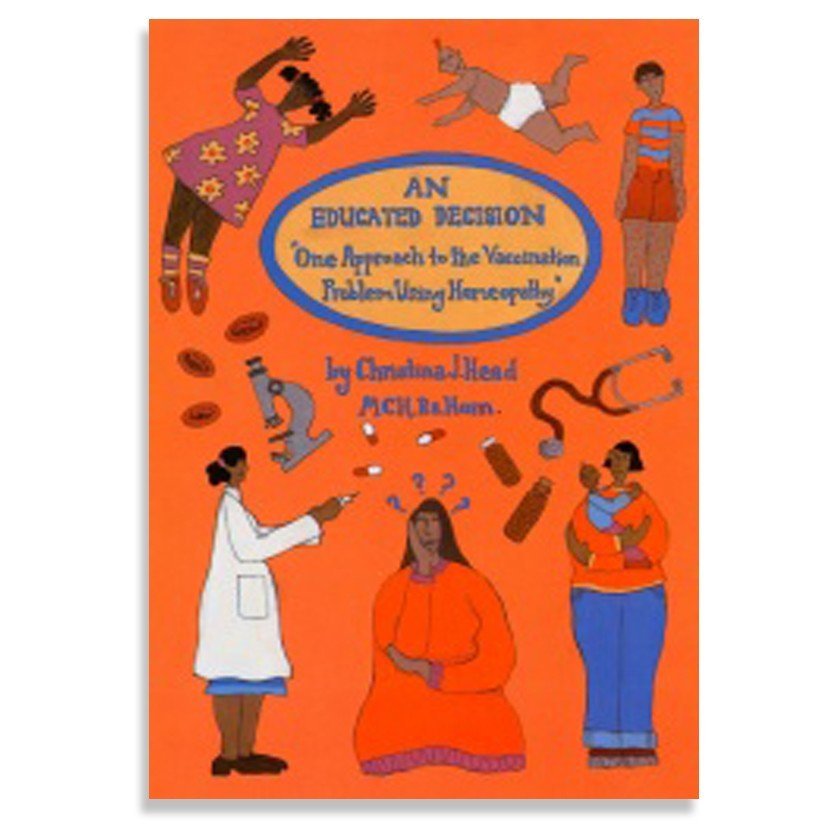 This book covers the issue of whether to vaccinate or not, the immune system and chapters on the main infectious diseases. The final chapter looks at the health of ten unvaccinated children whom have been brought up with homeopathic medicine.

Copies can be purchased direct from the author Christina Head. 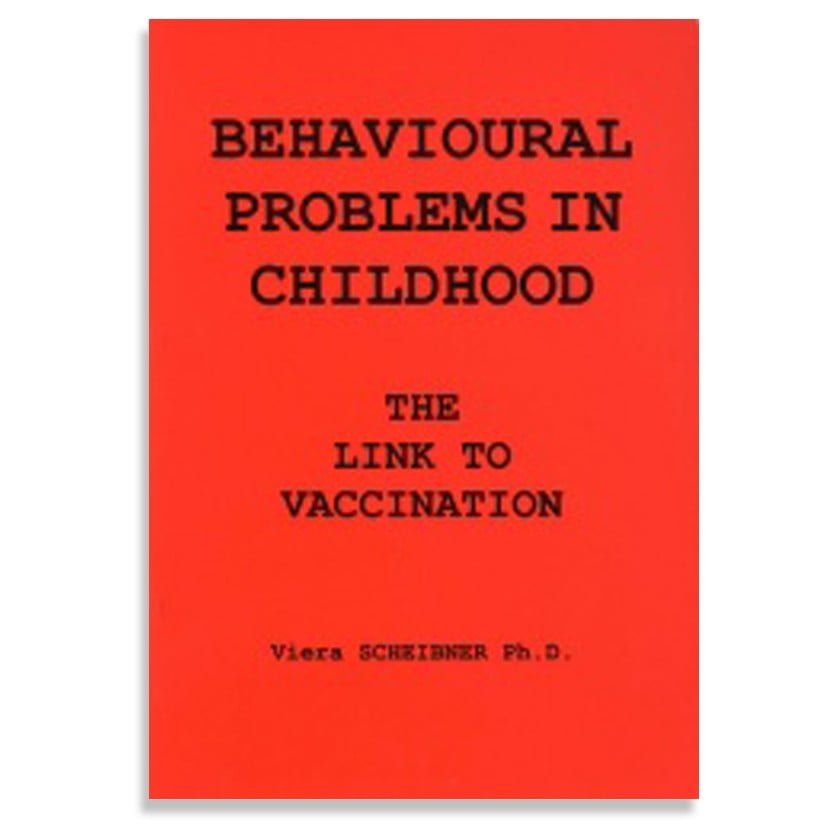 – The Link to Vaccination

This is the second book by Viera Scheibner, PhD – following on from her book Vaccination – The Medical Assault on the Immune System. This is a systematic description and evaluation of the link between a huge range of disorders of higher brain function and vaccination. 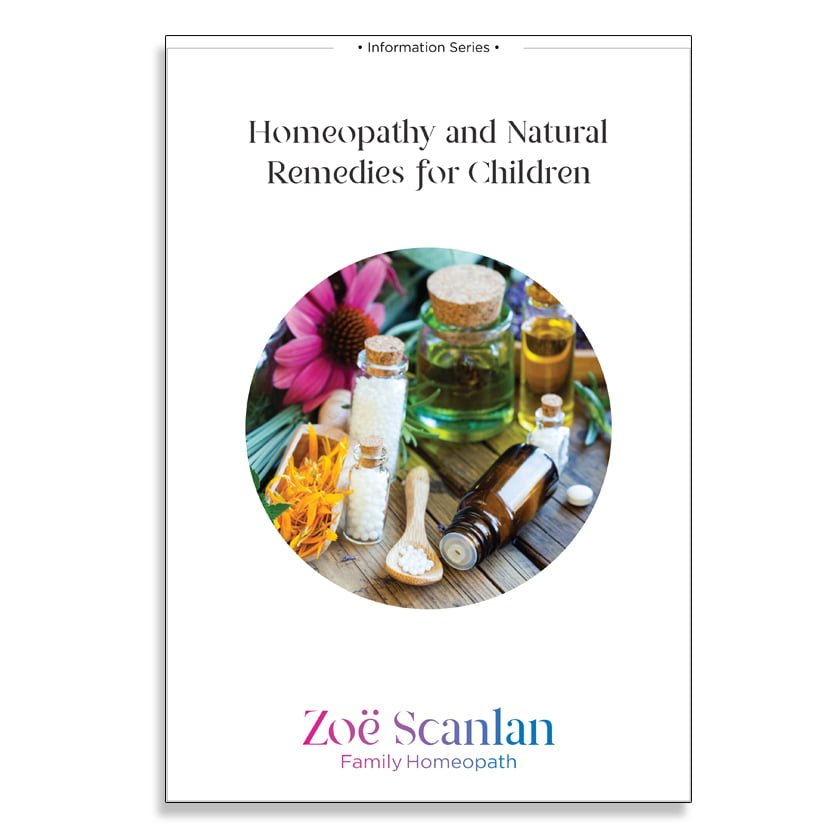 This booklet, compiled by homeopath Zoe Scanlan, comprises a series of information sheets on how to treat children’s ailments, such as, colds, fevers, behaviour and learning difficulties, measles to name a few. Concise and clearly presented enabling you to treat your child’s ailments naturally. 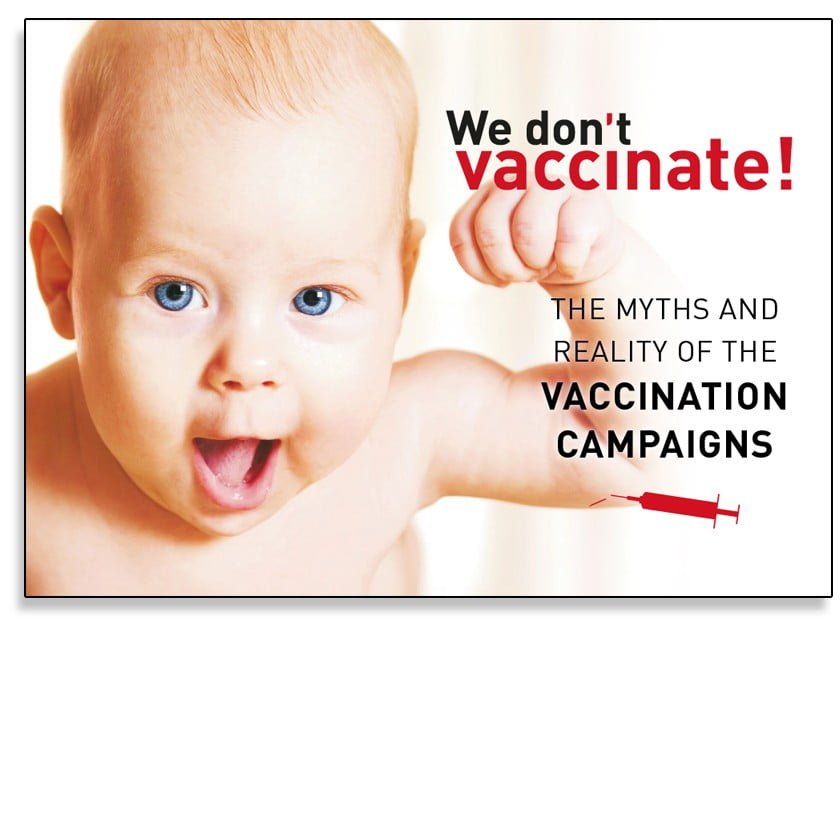 PLEASE NOTE:
DONATIONS ARE ALSO VERY WELCOME TO HELP COVER THE COSTS & TIME GIVEN TO PRODUCING THIS FILM.

You can give your donation HERE

‘We Don’t Vaccinate’ film documentary was produced in Germany by Michael Leitner and now an English version DVD is now available to purchase.

“At last – a Documentary that tackles the issue of vaccination full on. The presentation style is to be commended and the information and facts are put across sensitively in a calm and straightforward manner.

The subject of vaccination is enormous – this film highlights some of the main concerns which should lead the viewer to delve into the subject further and open their eyes to the true reality of this so-called ‘scientific’ procedure.

Films such as this will further the cause to wake up the unknowing public into seeing through the propaganda and medical control of the drug industry and bring some hope for the children of tomorrow.”

A HD-version can be rented for one month for only 3$ please visit: https://vimeo.com/ondemand/wdv

NB: eBOOKS MUST BE PAID FOR SEPARATELY FROM POSTED BOOKS OR SUBSCRIPTIONS.
YOU WILL RECEIVE A RECEIPT AND DOWNLOAD LINK AFTER PAYMENT HAS BEEN MADE. 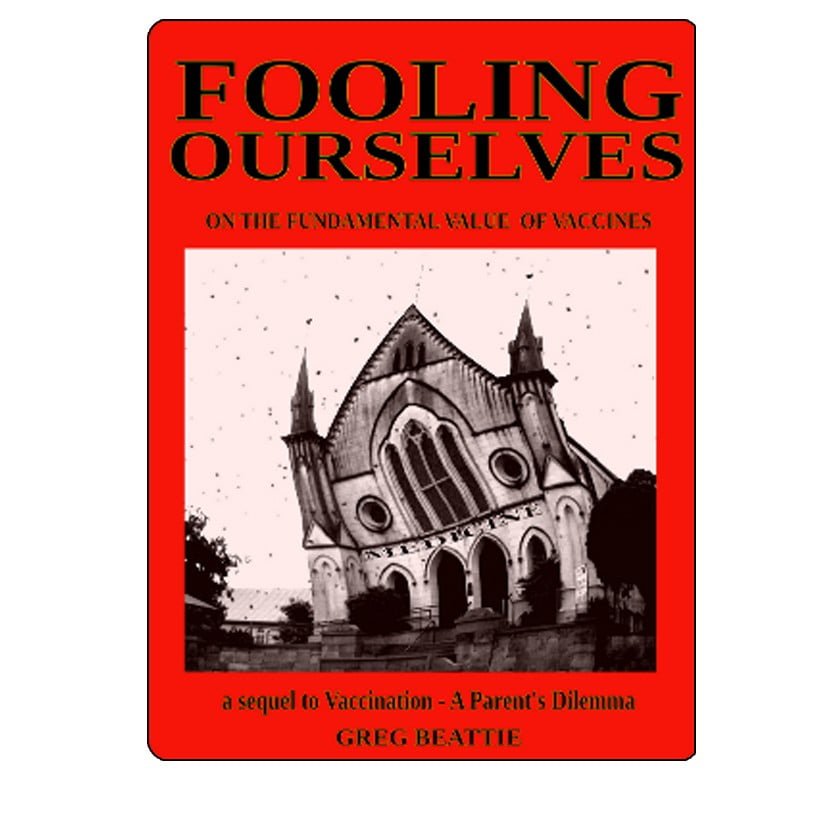 A new e-book from Greg Beattie, author of the very popular book ‘A Parent’s Dilemma’.

If you believe vaccination has saved more lives and prevented more suffering than any other medical intervention in our recent history… that vaccines were magic bullets that saved us from our infectious past… that if we all stopped using them tomorrow, deaths would soar… then this book is essential reading.

“Fooling ourselves: on the fundamental value of vaccines” examines these beliefs and concludes, using official data, simple logic and illustrations, that we have indeed been fooling ourselves for a very long time.

DONATIONS are always much appreciated to help keep The Informed Parent running! Behind the scenes much work, research, networking, emails, lengthy phone calls, trying to assist concerned parents with challenging situations, and all the enormous amount of general admin involved with producing the newsletter for the last 25 years has been achieved thanks to all those who subscribed and donated.
If you have found this website helpful please select amount you wish to donate and click button:

The views expressed on this website and in the newsletter are not necessarily those of The Informed Parent Co. Ltd. We are simply bringing these various viewpoints to your attention. We neither recommend nor advise against vaccination. This organisation is non-profit making.

The Informed Parent encourages the public to look into the controversial issue of #vaccination and make an educated decision.

Where are the control experiments??
https://brandnewtube.com/watch/the-final-refutal-of-virology_qI429ODGLmoRotN.html

EDITORIAL: A great pushback against vaccine passports appears to be developing https://thehighwire.com/states-rebuke-vaccine-passports/